Over the last six years Julie Anne Smith has grown ever bolder and broader in her slander of Biblical churches, ministries, and men. During that time her profane character and apostasy have become increasingly clear. Julie Anne openly partners with atheists, homosexuals, lesbians, pro-abortion activists, and murderous abortion clinic escorts on her blog and twitter.

“What fellowship has righteousness with lawlessness? And what communion has light with darkness? And what accord has Christ with Belial? Or what part has a believer with an unbeliever?” (2 Cor. 6:14-15)

Julie Anne has evil “fellowship…communion…accord…[&] part,” and she’s proud of it. When confronted with the reality of her open alignment with enemies of Christ, enemies of His Gospel, and enemies of righteousness, Julie Anne brazenly responded with this:

It’s all a big joke to Julie Anne. The Gospel doesn’t matter to her. Men and women’s souls don’t matter to her. The murder of millions of unborn babies doesn’t matter to her. She doesn’t express concern for the salvation of atheist, LGBT, or abortionist souls. She doesn’t exhort them to repent and believe in the Gospel. Retaining her friends and allies in her war against Biblical ministries and men of God is far more important to her than the salvation of eternal souls and rescuing unborn babies from violent murder and dismemberment.

Julie Anne goes by the alias of @DefendTheSheep, pretending to be a champion of children, while regularly interacting with and partnering with pro-abortion activists. The hypocrisy is astounding.  In her partnership and many interactions with her pro-abortion friends, Julie Anne never addresses the abortion issue, never pleads the case of the unborn, and never calls for their repentance and salvation through faith in Jesus Christ.

Crystal Lee is one of Julie Anne’s twitter friends. She is quite open about identifying herself as a lesbian, an LGBT marriage advocate, a pro-abortion activist, and a volunteer abortion clinic escort. Julie Anne has not addressed Crystal on any of these issues. In the midst of our current culture war with the LGBT redefinition of marriage, Crystal tweeted Julie Anne a comment designed to undermine Biblical marriage that is consistent with her lesbian profession. Julie Anne didn’t lovingly address Crystal’s personal sin or her attempt to undermine Biblical marriage. Instead of doing something Biblical, evangelistic, and loving, Julie Anne retweeted Crystal’s attack on Biblical marriage: 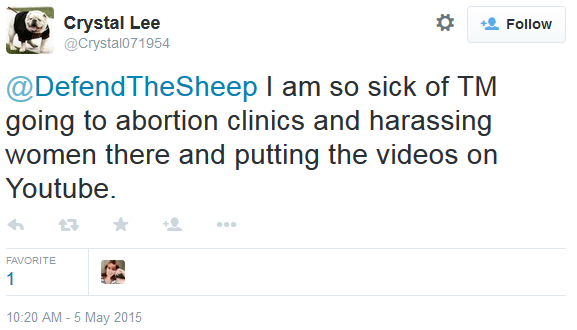 Below, Crystal Lee (a lesbian, abortion activist) joins Julie Anne in her slander of Tony Miano (a Biblical evangelist), has the audacity to make a reference to the Apostle Paul, and Julie Anne favorites her tweet: 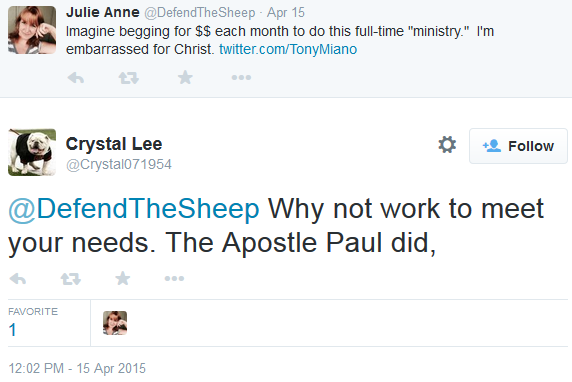 The following tweets are a snap shot of the LGBT and abortion promoting messages found on Crystal’s twitter feed on a daily basis: 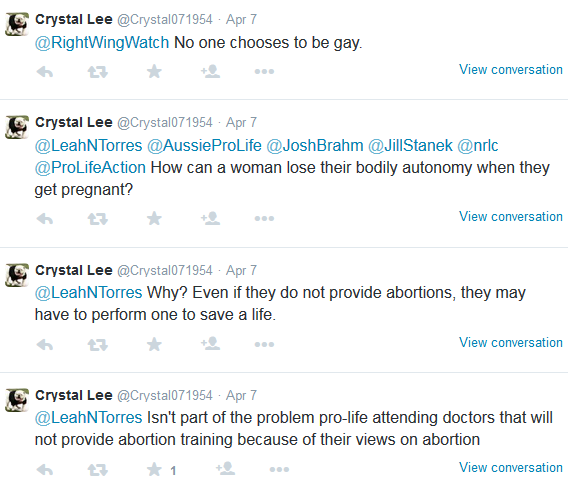 These final tweets from Julie Anne Smith and Crystal are a great example of how she regularly aligns herself with enemies of Christ. Crystal is an outspoken lesbian, LGBT marriage advocate. Crystal is a passionate abortion advocate and abortion clinic escort, standing outside of abortion clinics ushering babies toward death and dismemberment with a smile. Crystal is Julie Anne’s friend, follower, and partner in maligning pro-life ministries, evangelists, and Christianity as a whole. 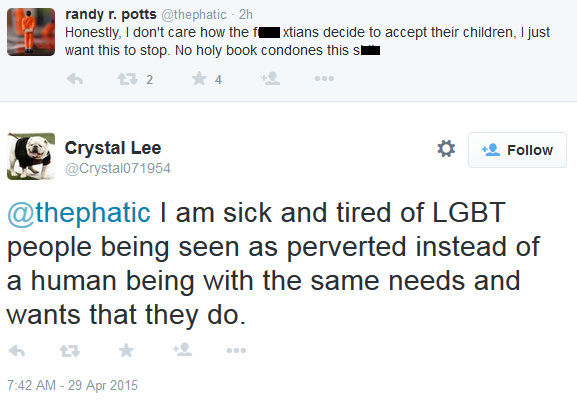 “They went out from us, but they were not of us; for if they had been of us, they would have continued with us; but they went out that they might be made manifest, that none of them were of us.” (1 John 2:19)

Six years ago Julie Anne Smith was placed under church discipline by Beaverton Grace Bible Church for her relentless criminal slander of Christ’s church and precious families. Since that time, her obsession with slandering Biblical men and ministries has destroyed her character and wholly undermined her profession of Christ. She and her partners are enemies of Christ, His Church, and His Gospel. May the Lord grant her and her atheist, LGBT, pro-abortion partners repentance and saving faith in the Lord Jesus Christ. May the Lord protect His Church from her unceasing divisive and destructive slander.