Every year Grace Community Church opens up their campus and their hearts to thousands of men from around the world to equip and encourage them in Biblical ministry. I call it an annual blessing and time of spiritual refreshment, they call it the Shepherds’ Conference. Being an enemy of Christ’s Church, an enemy of the Gospel, and an enemy of all things Biblical, Julie Anne Smith just can’t leave it alone. As is her method, she used her twitter feed to undermine this amazing ministry.

Julie Anne (aka @DefendTheSheep) and her followers are radically egalitarian, so she makes much hay of the fact that the Shepherds’ Conference is designed to train men for ministry. What is the result? A young woman, claiming to be an alumni of The Master’s College, says she’s “embarrassed about the college [she] attended.”

Criticizing a conference for being “by men, for men, and about men” is fairly mild. However, Julie Anne goes much further. She sent out a tweet suggesting that the Shepherds’ Conference is all about greed and making $$, pointing out that the registration fee is $300 dollars and showing a picture of the conference book store in the Grace Community Church parking lot. Julie Anne uses baseless accusations of greed like this to undermine Biblical ministries on a regular basis:

Over on her blog, Julie Anne turns up the heat and maligns the Shepherds’ Conference, Pastor John MacArthur, and Grace Community Church yet again. Following her lead, her friends and followers poured it on in her blog comments, and Julie Anne happily provided a place for her friends to mock the Shepherds’ Conference and celebrate throwing away Pastor MacArthur’s books and CD’s: “LOL! I took all of my Pastor John MacArthur books and CDs and tossed them in the recycling container recently…and it felt SO MUCH BETTER!”

Julie Anne posted a particularly ugly comment from someone by the name of Larry. The comment is highly critical of Phil Johnson (head of Grace to You & a GCC elder), and grossly disparages GCC and the Shepherds’ Conference with an allusion to John MacArthur being a pile of poop that idiotic flies are attracted to. This is the kind of filth Julie Anne takes great delight in putting on the World Wide Web: “Nonetheless, Johnny Mac is responsible, IMO, for the idiots who flock towards him. Flies are attracted to poop.”

As the pastor of Beaverton Grace Bible Church, I’ve been blessed to take a group of men to the Shepherds’ Conference for the last 15 years. Pastor MacArthur is the Charles Spurgeon of our day. The conference is the finest and most edifying pastor’s conference on the planet. The loving hospitality of GCC is unsurpassed. The Biblical preaching and teaching are ministry and life transforming. The worship is soul stirring. And Julie Anne, ever a reviler of Christ’s Church, tweets out accusations of it being all about money, and posts this comment describing the men who attend the conference as flies and Pastor John MacArthur as poop. Julie Anne’s blogs and twitter feed are full of these kinds of disparaging, slanderous remarks. She labors long and hard, using up her precious life, maligning Biblical churches, ministries, and men across the United States. May the Lord grant her repentance and saving faith.

Julie Anne Smith has joined the LGBT apostasy that is sweeping American evangelicalism. Julie Anne lends Bruce Jenner her support and says pastors who rebuke his sex change operation are “self-righteous.” Crystal Lee says, “You are right.” Who is Crystal Lee? One of Julie Anne’s faithful internet friends and followers, who also happens to be an outspoken lesbian LGBT activist, pro-abortion activist, and abortion clinic escort.

The following tweet makes it clear who Julie Anne’s friend and follower is:

Julie Anne’s LGBT apostasy is in full bloom in the following comment from her blog. She celebrates meeting a transgender woman and just loving her “without all the righteous judging” as “beautiful” and “absolutely freeing.” Julie Anne has no genuine love for LGBT men and women. She is helping to destroy their lives and damn their souls by withholding the truth of God’s Word regarding LGBT sin. She has no love for the LGBT when she condemns the call for them to repent and be saved through faith in the Lord Jesus Christ. 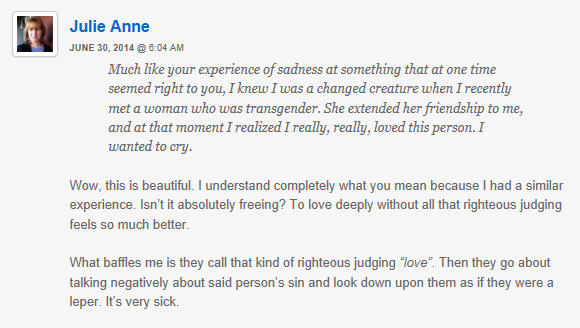 Julie Anne “was very touched reading” an article about professing Christian, Jonathan Merritt embracing homosexuality with the support of his father, a Southern Baptist pastor of some influence:

In the following string of 5 comments from Julie Anne’s blog, a young woman (tremblingcourage) identifies herself as “gay” and estranged from her family, who she says is steeped in a fundamentalist cult. Julie Anne’s adult daughter, Hannah Smith (Phoenixtatgirl), who has rejected Christ and embraced a life of sin, supports (tremblingcourage) in her plight as a “gay” woman who is estranged from her family. A third woman (Michaela) also supports (tremblingcourage) in her sexual immorality, and goes on to talk of her own terrible former church that didn’t accept “gays.” Julie Anne tells (tremblingcourage) that she’s “touched” and glad that she was encouraged. The final comment closes with (tremblingcourage) thanking them all for their kind words. The only problem is that there was no kindness and no love in any of their words. Supporting a young woman in her rebellion against God is hatred of her precious life and soul. Supporting a young woman in her rebellion against what are probably good Christian parents (not fundamentalist, cult, nut jobs), is hatred toward her parents, her siblings, and her precious life and soul. Julie Anne joined with Hannah in common support of this young woman embracing lesbian perversion. This isn’t love on Julie Anne’s part, it’s open hatred of the “gay” young woman and her own daughter. Genuine love calls all men and women, all young men and young women, and all boys and girls to repent of sin, and confess Jesus Christ as Lord for salvation. Supporting sin, celebrating sin, or ignoring sin, and refusing to call sinners to repentance and faith in Jesus Christ…is hate, not love.

“[Love] does not rejoice in iniquity, but rejoices in the truth.” -1 Corinthians 13:6

In this final comment, Julie Anne brazenly embraces the fact that she aligns herself with atheists, LGBT, and abortionists while attacking Biblical pastors, churches, and ministries across America:

May the Lord grant Julie Anne Smith repentance and saving faith in the Lord Jesus Christ. May Christ’s Church and dear souls like (tremblingcourage), be protected from her LGBT apostasy and slander of all things Biblical.