“Have no fellowship with the unfruitful works of darkness, but rather expose them.” -Ephes. 5:11

Slander-blogging is Julie Anne Smith’s full-time hobby. She partners with apostate LGBT and abortion activists to malign Biblical men and ministries coast to coast, all across America. As the old adage goes, “even broken clocks are right twice a day.” Sometimes, Julie Anne finds true stories of legitimate abuse of power, position, or perversion. Most of the time, she is busy fabricating stories of abuse against Biblical pastors, ministry leaders, churches, and ministries. Julie Anne’s “true story” is about donuts, but not just any donuts.

This “true story” comes from the comment section of Julie Anne Smith’s blog post titled, Indoctrinating Your Children with Doctrine. While Julie Anne stands firmly against you indoctrinating your children with Biblical doctrine as you see fit, she publicly boasts that she finds it “Hilarious!!!” to indoctrinate other people’s children with perversion, without their knowledge or permission while playing the role of an “adult” chaperone for a high school choir from Richland, Washington. Worse yet, according to Julie Anne, “corrupting” the Mormon children that were entrusted to her supervision was even more “Hilarious!!!” The Mormon children are the punch line of her filthy joke.

Julie Anne Smith recently shared with her internet following what she called a “funny and true story.” What was the “funny and true story?” It is the story of a trusted “Christian” choir pianist who goes by the title “Mrs. Smith” (approximately 50 years old) who was traveling with the public high school choir that she plays the piano for. While on their trip the high school boys and girls went swimming in the hotel pool. Sitting poolside, while watching the kids in their swimsuits, the trusted “Christian” pianist was suddenly struck with the idea that the kids should experience Portland’s premier perverse donut shop. This is no regular mom and pop donut shop. These are not the donuts you eat while fellowshipping after church. At Voodoo Doughnuts they sell satanic pentagram donuts, homosexual gay bar donuts, and cream filled anatomically correct male genital donuts that are named after the most pornographic slang term for that portion of the male anatomy, Cock-N-Balls. Out of the overflow of a perverse heart, the “Christian” pianist decided to spice up the trip for the public high school group of boys and girls. The pianist later bragged that she thought it was “Hilarious!!!” to force the kids to say the “inappropriate” pornographic name of this disgusting donut as they ordered. What makes the situation even worse is that this trusted “Christian” pianist told her internet followers that it was especially funny to coax the students into using the pornographic term since “a lot of the kids are Mormons.” The pianist boasted to her friends of pressuring the kids to “just say the word,” assuring them that they were “not going to get in trouble” for saying “Cock-N-Balls” in front of the other boys and girls, and the “Christian” pianist/chaperone.

Julie Anne Smith shared the whole perverse story with all her internet pals on a public forum. After reading her so-called “funny and true story” of corrupting the high school kids and Mormon kids, Julie Anne’s regular commenters glibly chimed in. One morally bankrupt commenter wrote, “So funny to imagine the home school, choir mom taking VooDoo orders for PUBLIC school kids, corrupting them, and being interviewed for standing up to a church leader.” Julie Anne’s response to that comment was to restate it, and then say that she “Roared at this… Hilarious!!!” Ed Chapman, a particularly perverse friend and internet follower of Julie Anne’s, asked her about the anatomically correct male genital donut; “why does it have to be chocolate frosting…it is a huge donut? LOL.” Julie Anne responded to his perversion with her own, “Ed, that one is pretty big. LOL. The kids had a great time with me reading off their orders, too.” Another friend asked Julie Anne, “Can you say ‘EEE-VILL’? as you stick your finger in your cheek and twist it?” My guess is that she can, and that she does every time she sits at her computer to attack another Biblical pastor, church, or ministry with her incessant “abuse” slander.

Don’t miss the reality of what took place. Julie Anne says that she and the kids had a “great time with [her] reading off their orders.” The “Christian” pianist, chaperoning a public school choir, read off each boy or girl’s name followed by the name of the donut, “Cock-N-Balls.” If that was big fun, no doubt, Julie Anne’s biggest fun was when the kids actually ate the perverse donuts in front of each other. The the whole disgusting scene was orchestrated by Julie Anne Smith.

The significant moral problems associated with Julie Anne’s conduct and her boasting about it on the internet should be obvious. When the parents entrusted their children to the care of the public school approved “Christian” pianist, I don’t believe they had any expectation that she would involve them in her “Hilarious!!!” perversion and then brag about “corrupting them” on her blog. This behavior is NOT in keeping with the parental trust that was afforded her, and can’t be in keeping with public high school policy. If a pastor or a male ministry leader did what Julie Anne boasts of doing, she would denounce him in the strongest terms possible as a perverted abuser and her internet lynch mob would get the rope.

Consider Julie Anne Smith’s GROSS HYPOCRISY. She and her slander-blog followers make it their business to find and/or create scandal, perversion, and abuse in every Biblical ministry and in every Biblical pastor’s life. To disagree with them theologically is “spiritual abuse.” Teaching a literal account of Genesis (Young Earth Creationism) is “intellectual/spiritual abuse.” Tithing is “financial/spiritual abuse.” Church discipline is “spiritual rape.” Biblical parenting (loving corporal discipline) is “emotional/physical/spiritual abuse.” Expressing concerns (wrong or right) about the pill causing abortions is “spiritual abuse.” The concept of a loving father giving his daughter a purity ring is attacked as “spiritual incest.” Julie Anne and her friends accuse an African-American father, who gave his daughter a purity ring (from the popular Gospel proclaiming movie, Courageous) of displaying and encouraging “SPIRITUAL INCEST.” That is the sick nature and method of master slanderers; take something beautiful and make it a disgusting, perverse accusation. That is Julie Anne Smith’s standard operating procedure. Her HYPOCRISY KNOWS NO BOUNDS in that her actions and internet banter are truly scandalous and perverse, and she boasts of it on the internet to the world.

What if we changed the gender of the pianist and the pornographic donut? If a male pianist coaxed the choir kids into ordering and saying the perverse name of an anatomically correct female genital cream filled donut there would be cries for his head, his job, his position, perhaps even legal action, and rightly so. Julie Anne would light the torches, hand out the pitchforks and lead the charge herself. Indignant parents would say, “Can you believe that this so-called ‘Christian’ pervert went on to brag about what he had done to these high school kids and those Mormon kids on the World Wide Web?” Questions would be asked. What should be done about this man’s perverse behavior? How should the public high school deal with the pianist? How should the parents of these choir students respond to this situation? What should the parents of the Mormon children and the local Mormon leadership do in order to assure that this sort of thing doesn’t happen to their children again? Assuming that this so-called “Christian” pianist attends church, how should his pastor deal with this? Statements would be made. This is completely unacceptable behavior for any man, but it is gross hypocrisy for a professing Christian family man to do this.

Is it any different because it is a woman pianist that goes by the title “Mrs. Smith” and not a male pianist called “Mr. Smith?” NO, IT ISN’T. Is it any different because the cream filled donut depicted male genitals rather than female genitals? NO, IT ISN’T. A “Christian” home schooling choir mom coaxing public high school kids (Mormon or otherwise) into perversion isn’t a “funny and true story.” It isn’t “funny” at all, but it is Julie Anne Smith’s “true story” of her own perverse behavior.

When the perverse banter died down, Julie Anne closed with this, “The genuineness that is shown here and the love – it blows me away.  I think this is what is missing in so many churches. I wish everyone could experience it.” There was no genuine love shown to the high school students (Mormon or otherwise). 1 Cor. 13:6 says that genuine love “does not rejoice in iniquity, but rejoices in the truth.”

The pictures below show the disgusting pornographic nature of what Julie Anne Smith introduced to the choir kids, and had the boys and girls eating together. There are plenty of pictures online of people eating Julie Anne’s pornographic donut, but as you can understand, pictures of people actually eating the donut are too disgusting and perverse to put up. I can’t imagine any parent (Christian, Mormon, or otherwise) being pleased that Julie Anne spiced up the choir trip with this filth. 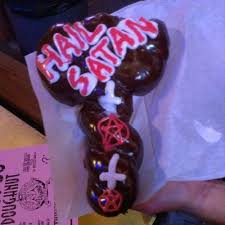 *The comments below came from Julie Anne Smith’s blog: Indoctrinating Your Children with Doctrine:

Take note of what Julie Anne roars at: “I roared at this:  So funny to imagine the homeschool, choir mom taking VooDoo orders for PUBLIC school kids, corrupting them, and being interviewed for standing up to a church leader. Hilarious!!!” Julie Anne comes fresh from corrupting public school kids, to begin her media campaign against Beaverton Grace Bible Church. She contacted the press, she repeatedly offered herself for interviews, and she boldly lied in her interviews while standing in front of a bus load of kids she won over to “liking” her through perversion.

“Corrupting” other people’s children (Mormon and otherwise) without their parents’ knowledge, while away from home on a choir trip and then bragging about how “Hilarious!!!” it was online is indeed “EEE-VILL.” What “Mrs. Smith aka Choir Mom” did was to abuse her position of adult authority and influence, because she thought it would be fun to introduce perversion into a high school choir trip away from home and that it would help the kids to like her. Then “Mrs. Smith aka Choir Mom” boasted to her followers online about her “inappropriate” and “Hilarious!!!” success in “corrupting” the choir kids, especially the Mormon ones. Then she stood before a news camera in front of the whole bus load of kids and lied to the press and the world about a church and a pastor. That is NOT Christian. That is NOT motherly. That is NOT loving. That is NOT even ADULT, except in the perverse sense of the word. BUT it is Julie Anne Smith’s “TRUE STORY.” May the Lord grant her repentance.

“And even as they did not like to retain God in their knowledge, God gave them over to a debased mind, to do those things which are not fitting; being filled with all unrighteousness, sexual immorality, wickedness, covetousness, maliciousness; full of envy, murder, strife, deceit, evil-mindedness; they are whisperers, backbiters, haters of God,“ -Rom. 1:28-30